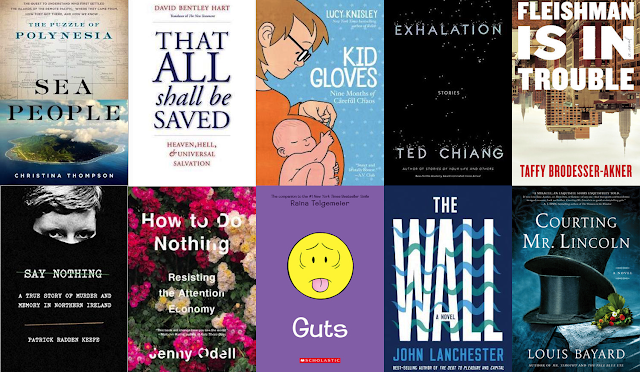 Sea People: The Puzzle of Polynesia, by Christina Thompson
The many islands of the Polynesian Triangle—its corners are Hawaii, Easter Island, and New Zealand—are tiny dots on a vast, deadly ocean. Yet the people who live there share a very close linguistic and cultural history. What drove their ancestors to settle these places—as distant and dangerous to reach at the time as the moon is to us today—and how did they do it? I like how the author of this book makes you absolutely yearn to know things…and then tells you them. Recommended especially to "Moana" fans.

Say Nothing: A True Story of Murder and Memory in Northern Ireland, by Patrick Radden Keefe
This book’s focus on a specific incident during the Troubles in Northern Ireland—the till-now-explained disappearing of a young mother by a masked band of paramilitaries—makes it a great starting point for the history of the Troubles. You meet a big cast of characters and learn about some key historical moments, but it’s all contained to the immediate vicinity of the incident in question. Atmospheric, dramatic, and eye-opening. Bonus recommendation: the audiobook is a fantastic listen, adding as it does the flavor of Northern Irish accents into your experience of the book.

That All Shall Be Saved, by David Bentley Hart
Hart, an Orthodox scholar working at the University of Notre Dame, recently released a translation of the New Testament. Notorious for being “pitilessly literal,” his New Testament attempts to recover the original eccentricities of the Greek texts, which are often much more ambiguous than translators let on. That All Shall Be Saved builds on this translation work, arguing that the Christian doctrine of an eternal hell is based on misreadings of the New Testament texts, as well as fatally compromised in both its understanding of the Christian God and in its internal logic. A fascinating, acerbic, witty text, worth serious reading and consideration.

How to Do Nothing, by Jenny Odell
A growing sector of the world’s economy creates profit by grabbing consumers’ attention through a screen, for just enough time to feel anger, amusement, jealousy, and to look at an ad. In How to Do Nothing, Jenny Odell notes that this "attention economy" is eroding our ability to slow down, think, and focus. In fact, its profits depend on this very distraction. Writing neither a how-to guide nor a polemic, Odell instead provides historical context for both the increasing demands of modern life on our time and attention, as well as some failed attempts to push back on those demands. Later, she offers her own experience of intentionally slowing her attention down, and seeking both useful means and appropriate topics of focus in troubled times.

Kid Gloves: Nine Months of Careful Chaos, by Lucy Knisley
This ingenious work of nonfiction comics interleaves memoir and history to create a picture of pregnancy, both the creator’s own and the phenomenon writ large. Alternatingly ribald and sobering, jocular and melancholy, this is an eminently readable tour de force.

Guts, by Raina Telgemeier
I’m one and a half years into teaching fourth grade, and there are few things I like more than finding a good middle-grade book or comic that captures the experience of fourth-graderdom from the inside. (For another such, see last year’s Be Prepared by Vera Brosgol.) Raina Telgemeier is the queen in this realm, and this follow-up to her celebrated work in Smile, Sisters, and Drama winningly crystalizes the joys and anxieties of making, breaking, and re-making friendships as a ten-year-old.

Exhalation, by Ted Chiang
These are short stories from a master, the brilliant, methodical Ted Chiang (author of “Stories of Your Life,” basis for the movie “Arrival”). They brim with extraordinary concepts taken to satisfyingly weird and beautiful conclusions. A time traveler from medieval Baghdad visits his own past despite knowing it’s unchangeable; a robot dissects his own brain to try to save his pneumatic world; briefcase computers create branching universes and let characters communicate between them. If you read one book on this list, make it this one.

The Wall, by John Lanchester
In a near future, an unnamed island nation off the coast of Europe has built a huge wall all the way around itself to deter Others—climate refugees—from entering. Young adults man the wall for a period of mandatory service. If any Others get over the wall, the same number of guards is put into a boat and put out to sea. This book is one man’s account of his time on the Wall. A bleakly amusing and amusingly bleak look into a plausible-enough future.


Honorable Mentions:
The Raven Tower, by Ann Leckie
City in the Middle of the Night, by Charlie Jane Anders
Sisters of the Vast Black, by Lina Rather

Fleishman is in Trouble, by Taffy Brodesser-Akner
Toby Fleishman, a liver doctor in New York City, is getting a divorce. Even though he makes six figures, he feels like an outsider in the world of high-finance power couples that wife has brought him and their children into. The crux: at the start of the novel, his soon-to-be-ex-wife drops the kids off and disappears, leaving him in mounting crisis as he tries to navigate the life they used to share. Witty, playful, and funny, this book shines especially in its narrator, an old college friend of Toby’s who he calls on when his chips are down, and she is in her own crisis of encroaching middle age rudderlessness. I liked especially its image of a group of college friends struggling to maintain and reimagine their friendships in adulthood.

Courting Mr. Lincoln, by Louis Bayard
Who was Lincoln before he was capital-L Lincoln? Here, we meet the rawboned country lawyer at his first introduction to Springfield, Illinois, high society, and watch him grow through the eyes of his closest confidantes (and rivals for his affection). These are his friend, the listless son of wealth Joshua Speed, a storekeeper who finds his purpose in helping Lincoln, and Mary Todd, the witty and beautiful eastern transplant in search of a husband, who turns slowly from bewilderment at Lincoln’s manner and manners to love for his mind and heart. Todd and Speed's rivalry shapes the future that they and Lincoln will grow into. I especially liked seeing Mary Todd in her playful and charming youth (rather than as a grieving mother and widow), and again recommend the audiobook for its excellent two-voiced production.

Honorable Mention:
Smoke and Ashes, by Abir Mukherjee
No comments: