Part of a series on Stuff You Might Not Know About.

Why use Tumblr? It's a service that's great for a few key things:
I'll talk in a moment about how to dive into Tumblr, but first, a few notes on what Tumblr is like before we get too much further.

First, Tumblr's user base skews quite young; the site allows people as young as 13 to sign up, and they do. According to the above chart, it's just above Reddit in terms of average age, but note how many of the Tumblr users are in that 0-17 bracket. Tumblr sometimes suffers in the area of maturity as a result of this.

Next, note that Tumblr skews left politically, specifically toward the activist part of the left. If you're not already a hardcore leftist, it's possible Tumblr use will (1) turn you into one or (2) fill you with rage. Tumblr users create and circulate a healthy stream of ideas about feminism, gender, race, and class, and the site's culture encourages frank discussion of and no aversion to conflict over these subjects.

Finally, Like Reddit, Tumblr is a bit of a Wild West in terms of what people can and will say and do. You're anonymous by default on Tumblr, and I think it's safe to say that anonymity makes it easier to post inappropriate things.1 Fortunately, Tumblr has plenty of tools for helping you avoid the stuff you don't want to see and track down the stuff you do want to see.

So, let us commence with the "how to" of this how-to.

First, decide what you want to do with your Tumblr. Do you want to make a blog about something in particular, say pictures of Older Black People Who Look Younger Than Lorde, or Teenage Mutant Ninja Turtle Noses?2 Do you want to just post whatever makes you happy? Do you want to post nothing at all, and just use Tumblr to follow other people?

Once you've done that, go over to Tumblr and sign up; you can use your real email address to sign up—Tumblr doesn't email you very much, in my experience. Then, choose a user name that's appropriate to your purpose; most people choose something anonymous, but using your real, actual name isn't unheard of either (I use my real name, for example, mostly because I couldn't think of anything better at the time I signed up, and still haven't, really).

Once you sign in for the first time, Tumblr will give you some instructions on setting things up, and they're pretty helpful. You can spend a lot of time tweaking the look of your blog if you wish, but I find that most people's are pretty dang ugly, so don't worry about it too much. The reason for this is that Tumblr users generally don't look at each other's actual sites; instead, they see posts from all the people they follow on their dash, which is kind of like Facebook's newsfeed: 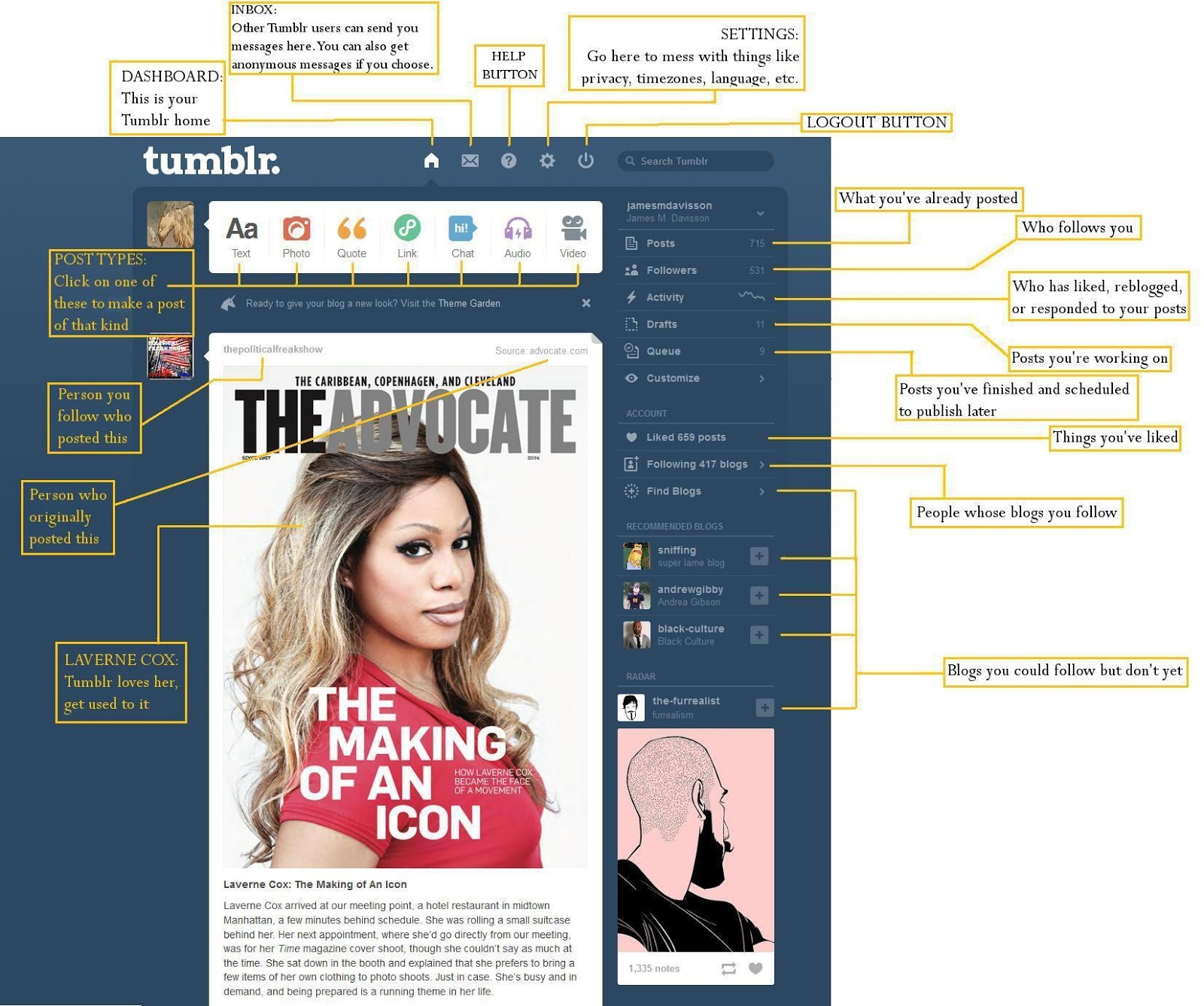 If you're putting together a themed blog, then go to town: you can create new posts by clicking on the appropriate post icon at the top of the dash. Post your stuff, and use the "tags" feature at the bottom of the post to make it searchable for other Tumblr users.

If you're just here to browse, you gotta find some blogs to follow. I suggest using the search bar at the upper right of your Tumblr dash to find stuff you're interested in. Search for a subject ("cat pictures," "belly flops," "corn pone recipe"), then click on a result to go check out the blog it comes from. If the description and the content of the blog seems good to you, click on the "+ follow" button in the upper right hand corner of the blog to follow them. (Alternative method: hover over their name anywhere it appears on your Tumblr dashboard or search results; their profile description should appear above their name, and you can choose to follow right then and there by clicking "follow" in the hover box.) From now on, everything that person posts will show up on your dashboard.

Once you have a bunch of blogs to follow, you can start interacting with the content on your dash. You can scroll through posts on your dash quickly with the "j" and "k" keys on your keyboard. If you see something you like, the bottom right of each post has buttons that will allow you to (1) go to the post on the person's actual blog, (2) reblog3 the post on your own Tumblr, or (3) like the post, which will save it for later in your likes section on your dash.

Them's the basics; you're now adequately prepared to use Tumblr.

Now, to the advanced material.

Once you're settled into using Tumblr and are pretty sure it's for you, there are some ways to make it easier and more fun to use:

The "Queue" feature on your dash, for example, will allow you to post things throughout the day; if you find a bunch of stuff to post but don't want to put it up all at once, this feature is for you. The "Activity" section can help you interact with others, since it notifies you when someone's responded to what you've posted.

Getting followers for your blog can be tricky; if that's a goal of yours (and it probably should be if you've come to the site for interaction and discussion), I can tell you what I've done to get it to happen. My method was as follows:

The other way is to get lucky; if one of your posts goes viral, you're likely to get a bunch of followers from that as well. This has happened to me twice.

The most important advanced feature of Tumblr is not inherent to the site at all, but an external feature developed independently. It's called XKit; it's a browser extension that you can download and add to Chrome, Firefox, or Safari. There's also a mobile version for iPhones (as an Android user, my jealously knows no bounds). It has a ton of very useful stuff (I find it hard to use Tumblr without it now), but most of it is hard to explain if you're not already familiar with the site. Suffice it to say that if you decide to use Tumblr in earnest, run, do not walk, to your nearest XKit dealer and get it now.4

1. Sometimes an unsavory person or blog will follow you; go ahead and ignore them which is to say, use the Tumblr ignore feature), unless you're not so inclined.↩
2. I mean, those ideas are taken, so don't do them, unless you can do it way better, somehow.↩
3. Reblogging has a somewhat unique look on Tumblr; it creates a nested effect that allows you to see and involve yourself in extensive conversations with other users.↩
4. I'm kidding, of course. Just go to the link, or Google it. It's free for browsers and not-free for iPhones.↩

Email ThisBlogThis!Share to TwitterShare to FacebookShare to Pinterest
Labels: How To, Social Media, Stuff You Might Not Know About